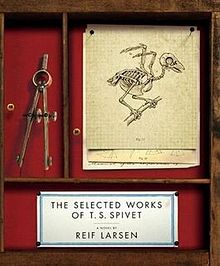 I bought this book on a whim at a used book store last month. I wasn’t looking for anything in particular, and this just jumped out at me (there’s a sparrow skeleton on the cover!). I’m so glad I picked this up. I started leafing through it and ended up just reading it for two hours. The Selected Works of T. S. Spivet is one of the best books I’ve read in a long time.

The story follows T. S. (Tecumseh Sparrow) Spivet, a 12-year-old scientific savant enduring a lonely, misunderstood existence on his family’s ranch in Montana. His father (another in a long line of Tecumsehs) is a rancher, his mother, whom he calls Dr. Clair, is a reclusive scientist studying the elusive and possibly non-existent tiger moth beetle.

T. S.’s life changes with a phone call. The Smithsonian (T. S.’s Shangri-La) has phoned to let him know he’s been awarded a Baird fellowship for his scientific illustrations, and they would like for him to come to Washington to give a speech. They have no idea that T. S. is only 12-years-old. 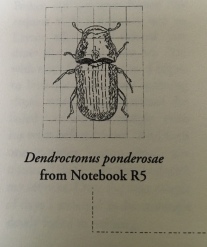 Armed with four compasses, two heliotropes, a theodolite, 16 packs of cinnamon Trident gum, and some underwear, T. S. decides to make the journey to Washington hobo-style by hitching a ride on the rails across the country. Along the way, we learn about T. S.’s life: his compulsion for illustration and map-making, his older brother’s accidental death, his father’s reticence, and his mother’s family history. T. S. discovers just how he fits in, with his current family as well as those who have gone before. 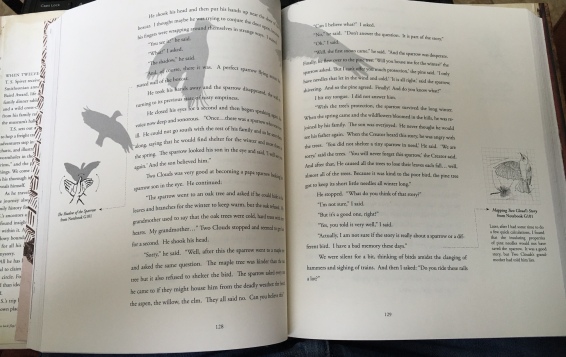 The book is cleverly illustrated with all kinds of illuminating details. These illustrations are what make this book so enjoyable. They’re witty, sometimes humorous, often revealing.

I recommend this to readers of all ages, but don’t be fooled into thinking this is a “kids’ book.” It’s not. I think some mature young readers will be able to appreciate the story, but adults may enjoy it more. The ideas presented in T. S.’s story are universal. Find a copy of this, leaf through it. I promise you won’t be able to stop.

One thought on “The Selected Works of T. S. Spivet – Reif Larsen”