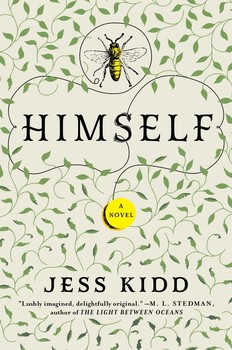 For the dead are always close by in a life like Mahoney’s. The dead are drawn to the confused and the unwritten, the damaged and the fractured, to those with big cracks and gaps in their tales, which the dead just yearn to fill. For the dead have secondhand stories to share with you, if you’d only let them get a foot in the door.

Mahoney, a handsome Dublin drifter, goes back to his hometown of Mulderrig to discover the long-buried secret of his origins. The townspeople believe his mother left him in an orphanage and then was never heard from again. Did she disappear and start a new life, or was she, as Mahoney suspects, murdered? All he has to go on is a photograph of him and his mother with a few short sentences written on the back.

Himself is an Irish Spoon River Anthology with ethereal descriptions and supernatural interventions. It’s charmingly rural, replete with folklore and eccentric characters, but also eerie with disquiet. My favorite character was Mrs. Cauley, described as a looking like a benign, geriatric spider, boarding in a house among toppling towers of books and old sheet music. She’s tart, but benevolent, and she can drink Mahoney under the table. She takes up Mahoney’s cause to solve the questions of his mother’s disappearance, and her money and chutzpah are just the motivation Mahoney needs. She knows that the ghost of her first love is lurking around. He often loiters in her hydrangeas while she sits in her garden plotting with Mahoney.

I was drawn to this book because of the Irish setting and the endorsement of M. L. Stedman (A Light Between Oceans). Several elements keep this book from being the usual hum-drum mystery:  the gothic Irish setting, where the town itself is a living, breathing thing; the peculiar, enigmatic, and often hilarious townspeople that you get to know as well as your own kooky great aunt; and the fact that the dead of Mulderrig are also skulking around, visible only to Mahoney, indulging in their vices and prey to their temptations, even in their spectral forms. The writing in Himself is exceptional. It’s rare to encounter such rich, apt characterization or creation of such foreboding atmosphere.  There’s a ghost of a little girl whose tinny voice taunts Mahoney, the incessant drum of the bees who murmur about impending storms, and the trees who “hold their own counsel” and dig their taproots deep. They all portend murder as the answer to the mystery of Mahoney’s mother, with more murder to come.

4 stars for the story, 500 stars for the writing. As soon as I picked this one up, I dropped everything else I was reading. It will grab you from the first sentence and won’t let go.

Himself will be published on March 21, 2017. Many thanks to Netgalley, Atria Books, and Jess Kidd for this advance copy in exchange for my honest review. 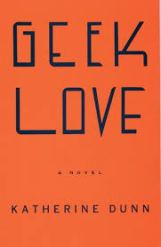 This is one of the most bizarre and outlandish books I’ve ever read . . . in a good way.

Things you will encounter in this book:

Other things you will encounter in this book:

Geek Love follows the life story of Oly, an albino humpback, reflecting on her life growing up as a member of her family’s traveling freakshow, the Binewski Fabulon. Her parents, Al and “Crystal Lil”, purposefully engineered their own family of oddities using experimental drugs and radiation when conceiving their children. There’s Artie the “Aqua Boy,” a tyrant and prophet with his own coterie of self-mutilating followers; Elly and Ipphy, the conjoined twins who share legs but have vastly different personalities; and Chick, the youngest Binewski, who was almost abandoned for being a “norm,” but proves to have invisible powers.

Oly’s story of the carnival is wrought with jealousies, lust for power, manipulation, and yearning for love, like any family drama; however, the weirdness factor casts a shadow on it all, which only makes the story that much more interesting. There are other unusual characters in the freak show, including the Bag Man, who gave me serious heebie-jeebies. There’s a second story as well of Oly developing a relationship with her estranged daughter, complete with more peculiar characters and perspectives about the negativity of beauty.

I enjoyed this story, warts – quite literally – and all. The only drawback from my enjoyment was I felt a bit more editing was in order as the pacing was off. I got bored in the middle and found the story repetitive, but the unusual storyline and gory characters compensated when the story seemed to stall. Many reviewers complained that this book was nauseatingly gruesome (have they never read Cormac McCarthy?). This book is not for the faint of heart, but if you enjoyed “American Horror Story” (especially season 4), you should be just fine.