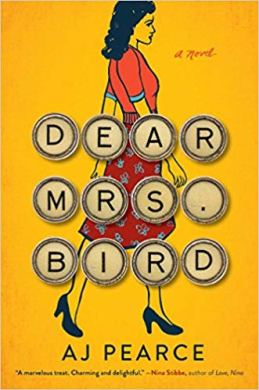 Recommended for readers who liked Letters from Sky by Jessica Brockmole, or As Bright as Heaven by Susan Meissner, or The Memory of Us by Camille de Maio. It’s also reminiscent of shows like “Call the Midwife” and “Land Girls”.

In London during WWII, Emmeline is a young woman longing for a career in journalism, and she unwittingly takes a job as a typist for a brash woman, Mrs. Bird, who writes an advice column for a ladies’ magazine. Em takes it upon herself to respond to the “inappropriate” letters that Mrs. Bird refuses to answer, getting more and more daring and ultimately sneaking them into the magazine.

Em’s self-appointed career as an advice columnist is only part of the story. This book raises some deeper issues regarding women’s often overlooked trials during the war. Losing spouses either to combat or desertion, rationing, and the constant bombings throughout the city led to some unprecedented struggles with grief, guilt, and fear. The women left behind at home were told to “buck up” and put on a brave face for the men returning from the fight. They weren’t allowed to feel the pain of their fears and sacrifices. Dear Mrs. Bird addresses this issue with finesse around an enchanting story.

Many thanks to Netgalley and Scribner for the advance copy in exchange for my honest review.