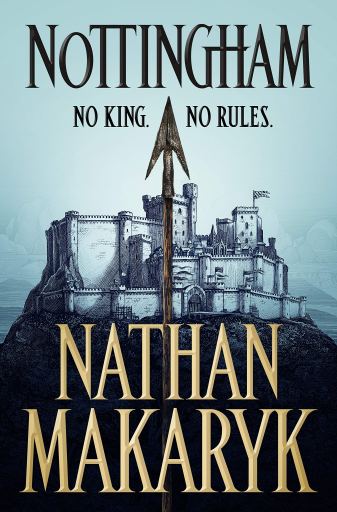 This is one of those kind of books where you’re going to be immersed and involved for quite some time, so you’ll have to put all other books aside and know that you’re in it for the long haul. Makaryk has breathed new life into this story. This is not the tired story of the plucky hero versus sinister sheriff you’re used to.

Nottingham reads like a blockbuster movie. There’s constant action and switching of characters’ perspectives. The third person omniscient point of view allows the reader to get into the heads of the heroes and villains alike; however, no one in this story is all good or all bad, which affords this story some depth. At times, those who first appeared to be villains are allowed some sympathy, while our heroes sometimes become selfish and power-hungry.

This is a quintessential epic tale of adventure. It is a tad too long, and maybe paring it down a bit would have helped propel the momentum that lags at times, but I was still riveted to the pages and enjoyed being carried along on this twisting adventure.

I appreciated the back story of Robin and his best friend William de Wendenal, and knowing what they had faced in their pasts while following them through this trial of their friendship and test of morals rounded out the reasons for their actions. The “merry men” were not stereotypes, and each had his own story, loyalties, and reasons for fighting for and against Robin. Nottingham is complicated and bloody, and not everyone gets a happily-ever-after. Definitely pick this up if you want a real story of Robin Hood.

Many thanks to BookishFirst for the advance copy in exchange for my review.